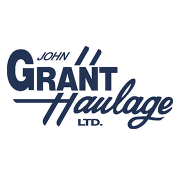 John Grant Haulage Limited was established in 1954 by John Grant, who built the company from a single dump truck. Throughout the years, additional business units were acquired, including Hurdman Bros based in Ottawa, ON.

Today, Grant Haulage is one of the largest dry bulk cement carriers in Canada. The company also specializes in the transportation of resin and flour products. Grant Haulage is made up of tanks ranging from tandems to five axle configurations, operating primarily throughout Ontario, Quebec, New Brunswick and Western New York.

Thank you for your interest in AZ employment opportunities for truck drivers at John Grant Haulage Limited and Hurdman Bros.

John Grant Haulage is hiring AZ tank truck drivers for transporting resins and flour in Mississauga and the surrounding area.

If you have any questions about AZ employment in Mississauga and Ottawa Valley, contact us.